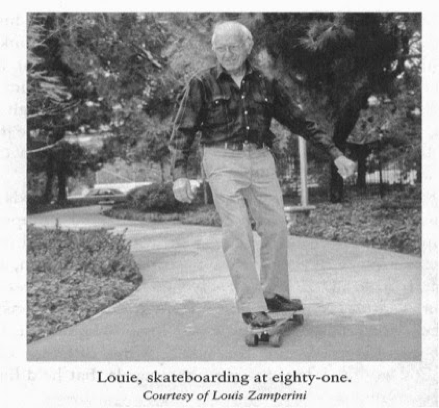 Updated August 2022 – When I think of optimism and resilience in people, I think of our “greatest generation” and people like Louis Zamperini.  Zamperini faces extraordinary trauma, as depicted in the book, Unbroken, and he has leadership lessons for all of us. If you haven’t read the book or seen the movie, Unbroken, you must add it to your list.

The Story of Louis Zamperini

Born in 1917, Louis competed in the 1936 Olympics as a champion distance runner, and then joined the American Air Force at the outbreak of the second world war. In May 1943, his plane was shot down over the South Pacific, killing eight of the eleven crew and leaving Zamperini and two others stranded in a tiny life raft. Enduring the loss of their friend Mac from starvation, machine gun fire from passing Japanese bombers and shark attacks, Zamperini and pilot Russell Phillips held out for 47 days.

When they finally reached the Marshall Islands, both were too weak to stand. Little did they know, their struggle had only just begun. They were rescued by a Japanese warship and sent to various concentration camps where they suffered sadistic beatings and threats of death daily until their release in August 1945.

In an interview for CBS, Zamperini said, “They took great joy in telling us we were going to be executed. They would always go through the motions, gesturing with samurai swords and so forth. So every morning we woke up thinking, well this is it.”

The physical and psychological trauma that Zamperini endured was unbearable, and most of us can’t imagine. He did return home and suffer from some depression and nightmares, but he went on to start a new career as a motivational speaker promoting the power of forgiveness.

The Need for Resilient Optimism

You may never experience what Zamperini went through, but there are days when you feel like you are being attacked, surrounded by sharks and need someone to help you. In business and life, rapid change is the normal and it comes in waves, hurricanes and now in “bomb cyclones”. Today, leaders and their organizations are forced to address increasingly complex challenges as well as grow with uncertainty.  Speed and agility are not the only edge.  The need for effective leaders that are resilient, optimistic and emotionally intelligent is more important than ever.

The definition of optimism is hopefulness and confidence about the future or the successful outcome of something.  The definition of resilience is the capacity to recover quickly from difficulties; toughness.  Our leaders need to learn and understand better how to be resilient and optimistic especially when they are facing pressure and challenges.

Alvin Toffler famously said, “The illiterate of the 21st century will not be those who cannot read and write, but those who cannot learn, unlearn, and relearn.” Our view of the world and daily attitudes and behaviors are learned patterns to which Toffler’s insight applies with earnestness — the capacity to “learn, unlearn, and relearn” emotional behaviors and psychological patterns will be the edge leaders need to survive and thrive in this ever-changing crazy world.

How do you learn to be resilient and unlearn bad behaviors?

You take time to be self-aware and understand how to think like an optimist.  Martin Seligman, author of Learned Optimism,  is an expert on optimism, and he shares his study on how humans and animals become passive when they experience failure and feel like they have no control.  His study reveals that we start to expect failure again and develop “learned helplessness.”

His study revealed that a third of the researched group of animals and people who experienced continuous failures never become helpless.  Seligman attributed this to optimism.  According to Seligman, “Over 15 years of study, my colleagues and I discovered that the answer is optimism. We developed questionnaires and analyzed the content of verbatim speech and writing to assess ‘explanatory style’ as optimistic or pessimistic. We discovered that people who don’t give up have a habit of interpreting setbacks as temporary, local, and changeable. (It’s going away quickly; it’s just this one situation, and I can do something about it.) That suggested how we might immunize people against learned helplessness, against depression and anxiety, and against giving up after failure: by teaching them to think like optimists.”

When life comes at us with the struggles of negative politics, economics, finance, relationship setbacks, parenting challenges, health issues or an overall feeling that life is not turning out the way you thought it would, a healthy dose of optimism can release some of that stress.  Sometimes, we need to change the lens that is viewing our present moment and future and ask a few questions about our own level of optimism and how we are managing difficult situations and daily setbacks.

“How would Louis Zamperini view this problem and what would his attitude be?”

Louis Zamperini never gave up! He continued to be an optimist until the day he died.  We can all learn from his story and from the research of Martin Seligman on optimism.  Remind yourself when things are tough and the pressure is on, we have the capacity to be resilient and optimistic and don’t let anyone change your mind or influence you negatively.

Bobi Seredich is a recognized emotional intelligence keynote speaker, author, trainer and successful entrepreneur specializing in leadership development. She has spent over 20 years of her career dedicated to creating, directing, writing and presenting leadership programs for top companies in the U.S. and around the world.

Bobi is the co-founder of the Southwest Institute for Emotional Intelligence and Managing Partner of EQ Inspirations.

Lack of Impulse Control: Is It Preventing Leaders from Engaging with Their ...
Scroll to top